The Rate Form system has its origins in Professor Elo's book "The Ragin of Chessplayers", which in turn was adapted for soccer by Tony Drapkin and Richard Forsyth, and described in their book "The Punter's Revenge" (Chapman and Hall).

As soccer matches (or football matches as you wish) are played over a season the points totals are updated for each team. Points totals carry forward from one season to the next, which makes it possible to do a comparison over the history!

The fundamental features are :

This Rate Form system is a perfect system over time, as the points are not calculated from scratch at the start of a new season. The following picture shows the performance of AC Milan over the past years. In the season '93-'94 AC Milan ended as the champion in the Serie A, as displayed in red. The next season they ended fourth place. 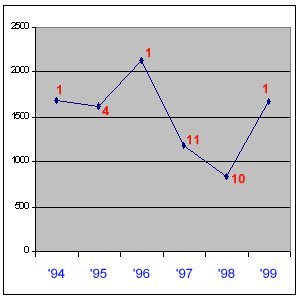 As you can see in the image, this form guide uses the previous years in the calculation, as the first position in 1999 is not "as good" as the one in 1996. The longer the strong sequence, the higher the rating.